I've been a terrible online-friend the past couple of weeks, double-y so since I have a full MS and a partial one on my desktop which I promised to read/critique for two of the wonderful people who read/critiqued 'Brake Fluid'... and I've barely touched them.

I just got home yesterday from being away a week, and I didn't take my laptop with me.

What was I doing?

I was in Seattle for the Seahawks game on Monday (7 hour trip from Victoria to Seattle for that), then the husband and I drove up to the Okanagan (an 8 hour driving trip) Tuesday morning. The purpose was twofold.

The husband had a conference, and I tagged along because my paternal grandmother lives about 20 minutes from where the conference was going to be held.

She's my last living grandparent and I only see her once a year (at Christmas), so I thought this would be a good opportunity to spend time with her and help out with any chores she had that were beyond her physical means.

I also spent a lot of time just sitting and listening to stories.

My grandfather was a gunman in the Canadian airforce (where the estimated live-span for a gunman was 3 weeks) and completed a 3 year tour in India and Burma during the second world war. Due to his papers getting lost in London, he coincidentally met my grandmother. They knew each other 6 weeks, he proposed on a Monday, and they married (big church wedding and all) 3 days later on a Thursday, then moved to the Okanagan where his family was from.

As I was leaving, my grandmother gave me a gift. A khukuri knife given to my grandfather by a member of the ghurka regiment he fought with in India, which, if you're familiar with ghurkas, is quite the honour. 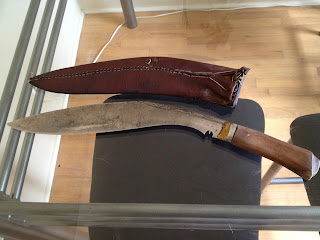 Apparently it was well used by its original owner... as my grandmother aptly put it, "I'm sure it took a lot of ears during the war."

And it seems like it was. The handle is worn smooth and it looks like the blade was repaired at some point near the hilt.

For anyone who thinks this is an odd gift... well, I've got a couple of machetes from Africa (Kenya), and a couple of small knives from the Philippines along with a small hunting bow/arrow set that's only about two feet long... supposedly to shoot with when you're lying on your stomach in the underbrush.

I'm not overly crazy about weapons, but I like pieces that I know the history of and have some kind of personal connection. The machetes were gifts from my sister and a friend when they went to Africa, and the bow/arrow set was a gift from an old woman I met while in the Philippines. She was part of a non-profit organization in Manila that translated English books into Tagalog.

So, yes, I've been a bad online-friend and critique partner by going MIA this past week or so, but I'm back now and plan to catch up as quickly as I can.

Hope you all are well.