...is it redundant to dress a black cat up in a costume on Halloween...?

Normally, at the husband's office, some people bring their costumed pets in at the end of the day and have a mini party. Unfortunately, the husband is in Vancouver for meetings today, but since I had already purchased costumes to participate, I'm going to dress them up for when he gets home as a surprise. 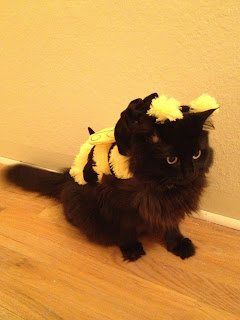 Berkeley, taking it all in good stride like the little philosopher that he is... I figured, a cat is pointy on 5 of its 6 ends... so a bee costume (with the stinger) would be perfect! Now he is fully armed to take on the world. 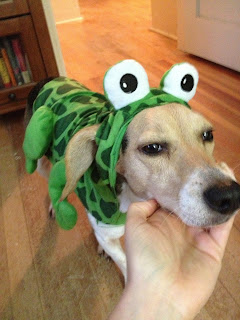 Eva, the beagle, is less tolerant and hangs her head and tail like she's been scolded... but, since she frog-legs on the floor (y'know, when dogs lay on their stomachs with their legs splayed out) a froggie costume seemed appropriate. If she was less of a baby about this, I would be able to take her to the dog park on rainy days... but as soon as I put her rain-coat on, she acts like this again... hang-dog expression and won't walk/move/etc, just sulks. BUT, if she doesn't have a coat to protect her sensitive ears, she shakes her head whenever a raindrop hits her head... and with the west-coast rain, she just stands in one place and shakes, and shakes, and shakes... and refuses to walk.

Either way, walking with her in the rain just doesn't happen. It's too bad since it's been absolutely pouring rain here the last 2 weeks and I've only been able to take her out once.

If anyone else is posting costumed pictures of yourself, your kids, your pets... post the links in the comments! I'd love to see them :)
Posted by 1000th.monkey at 10:46 AM