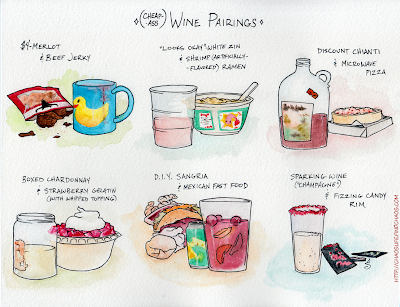 Sometimes I wonder if I have bad taste.

It feels wrong to admit that I don't like hero-characters, or ones that display the 'good' of society. Self-absorbed characters are brighter, bolder, and far more interesting. I'm usually drawn to the side characters (of books or tv shows) instead of the main characters. I like the odd, quirky books and tv shows that can't seem to find an audience

...and I frequently wonder if that is going to impact my ability to write anything that will appeal to a larger crowd (aka, someone other than me will enjoy it).

I know they say to write what you love, but is that enough? What if my taste in books/characters/writing/entertainment is inherently flawed?

I'm not wallowing in self-loathing or anything. I don't need reassurance, or confirmation...

I have a remarkable amount of pride in what I have created and what I want to create in the future, but this is one of the fears I battle with on-and-off.

The silver-lining is that I worry about this problem more than I worry about my dyslexia. Sure, I have my days when I can't string together a coherent sentence. The new Blogger word-verification has just about destroyed my ability to comment on other people's blogs, 'cause, y'know, it wasn't damaging enough to my self-confidence before to continually 'fail' at proving I'm human, so let's add a second word and make both of them nearly unreadable!

I've proven to myself that I can overcome my disability, but is it possible to overcome bad taste?

I was talking about Project #2 (Simon's Oath) with one of my beloved writing-group members, and she asked me what I liked about the story. One of the first things that sprung to mind is the fact that there's not a Hollywood happy ending. But it's a satisfying ending, at least in my opinion.

Those of you who volunteered to read/critique my synopsis for this story a while back should understand, and those of you who have read the entire story, in one or more of its various incarnations, should also get what I mean.

I wanted a realistic ending. Consequences for Simon's actions. The understanding that Faith isn't magically going to become normal. That the madam, twisted as she is, is still Faith's mother.

There's no Disney-esque-group-hug at the end, a standing ovation, victory over a defeated enemy, or a drawn-out passionate kiss.

I wonder... do I write anti-climactic stories?

Part of the reason I'm asking myself this is because of Project #5. It's about the least 'me' story I've ever written. It's more plot/action-based (an actual quest!) than character-based, there's romance (sortof), and the ending I have in mind is... well, less 'me' again. It's really quite straightforward. The characters are more human/civilized than feral.

...and I find myself floundering. It's hard to get into this head of this character who is so... good, so upright and selfless. So... heroic, in a way.

But I also wonder, in this 'less-me' story, am I searching beyond my usual story-fare because I'm not satisfied anyone will like what I do, or am I simply expanding my repetoir into new and unexplored areas?

Is it fear, or is it confidence that I can go in a new direction?

Honestly, I have no idea, but this has been occupying a large portion of my mental facilities as of late.

And by the way, a fresh, home-brew pinot-noir goes amazingly well with a grilled-cheese sandwich and beet pickles ;)
Posted by 1000th.monkey at 7:02 AM