A week of painting

Okay, it was really only three days and it was more information/technical details and separating/cleaning/sorting a box with about 300 brushes* than it was actual painting.

But I promised you guys some pictures...

So, what did I learn?

How to use my kiln. Well, how to use it for simple things. Apparently you can use it for way more than I thought you could.

I also got a lesson in grinding paint and mixing it. There are, like, about a dozen different kinds of oil you can use... it boggles my brain. And even a way to combine it with a water-base material instead of oil so it's less toxic.

A lesson in mixing raised paste and enamel. A lesson in painting with gold, the different kinds of gold and which need to be burnished afterwards.

A lesson on lustres.

A lesson in how to use a pen to write/draw with gold or paint.

...and an ongoing reminder of the highly toxic nature of this particular kind of art. Apparently arsenic is the medium mixed with gold (when you paint with it in this state, it looks like a dark greenish-black -> the darker it is, the higher quality of gold). You burnish it with a fibreglass brush (so don't breath, don't touch it with your bare hands, don't let the dust get anywhere or go down the sink). Some of the other ingredients are tin oxide, turpentine, alcohol, there is lead in some paints, so you can only use those paints on decorative objects (not plates/cups/etc), and you can use hydrochloric acid to remove paint that has been fired on.

Also, when the kiln is on, you need really good airflow and an air purifier because all those toxic things (and the oils) get burned off.

And a lesson in cost. One tiny 1/2 oz container of ruby lustre is about $65. A container of gold about the same size is around $500. Brushes can cost up to a couple hundred dollars each (depending what kind).

After all that, are you surprised I actually had time to paint anything?

I did a pair of mugs. First thing I did was wash them good with hot water and soap, then rubbed them down with alcohol. After that, I used a .01 Micron pen to draw a basic design. With a tiny paintbrush, I then filled in the shapes (to mask them) with an interesting glue-y product called red resist. When that dried, I dripped tiny drops of honey-thick lustre (blue, green & amber) onto the mugs, and with an eye-dropper, put turpentine on and rubbed with my finger to mix them. Then I held/turned the mugs and let the lustre run every which way to create interesting patterns.

When the lustre was dry, I peeled off the red resist and fired them. 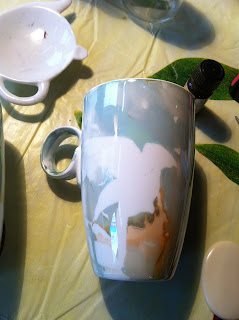 So, here's one mug with the first layer of lustres fired on (green, blue and amber). You can see the white bird shape from where I masked the porcelain with red resist. 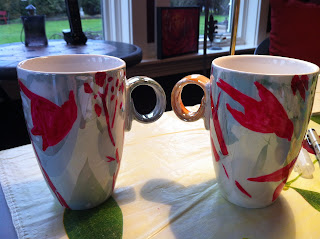 After the mugs were cool enough to touch, I re-masked the birds with red resist and then masked other parts of the mugs where I wanted to keep the original soft lustre colours. The lustres come out with a sheen like gasoline, so it's a little difficult to see all the funky patterns in these photos. Like, on the left mug, what looks like an inverted 'Y' is actually just a reflection of light. I also got a practical lesson on using hydrochloric acid at this point because a bit of lustre got inside both mugs and was accidentally fired on. So, with a Q-tip, I carefully cleaned it off before the second firing. 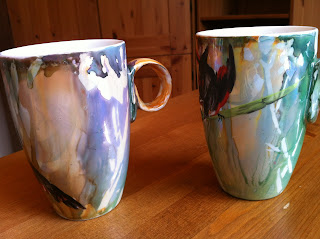 Here's a shot of the backs after the second layer of lustres were fired on. See how much richer/deeper the colours get? On the right mug, you can also see the lighter bamboo-shapes, which are parts that I masked off (see previous picture, right mug). This time I also used a darker green instead of the lighter green to give that added dimension. 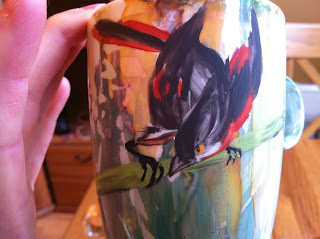 Here's a bird/bamboo I painted on using the water-base mixture technique instead of oil. I fought with the oil-mixed paint, open-medium (meaning it won't dry, ever) for about four solid hours and was getting frustrated because it was my last day there and I wanted to fire these before leaving. That was when my teacher said, "Oh! You can also mix it with a water-base ingredient!" The problem was, I only had time for one fire (about 3 hours total, 'cause the kiln just had a couple pieces in it) and the oil-mixed paint wasn't giving me the strong colours I wanted (normally you paint several layers, firing between each layer), nor was it allowing for the free-style brush strokes that I like to use. I like to see the texture within the brush strokes. The water-base mix worked very well for that, and the paint dried (you still can't touch it directly though, or it'll leave fingerprints) but it made it easier to work with. I ended up painting all four birds, and the bamboo they're sitting on, in about an hour and a half -> and that includes me wiping them off completely and re-starting at least a dozen times. 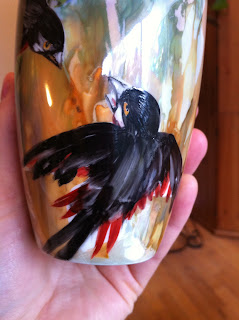 You can see after it has been fired (for the third time), the paint is darker in colour and is now shiny, but you can still see the texture. I have always loved Chinese ink-brush painting (or Japanese Sumi-e painting) because of the strong, confident strokes (there is no room for error) and I thought something like that might go well with the freeness of the lustres.

It's been so long since I've painted on porcelain and it's such an alien medium (especially trying to paint on a rounded surface), so I am happy with this first attempt, but honestly, I'm not sure if I like or hate the end result. I think if I had stuck with the lighter-coloured lustres (and not used dark green on the second round), I would have been a bit happier. 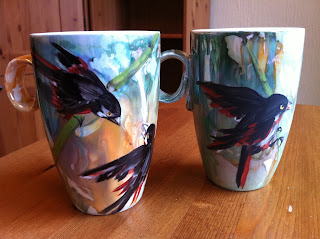 Here's one last shot of the two together. If your eyes are sharp, you'll see that the mug on the right has not actually been fired a third time 'cause the paint (birds) looks matte. I might add touches of gold to both, like around the rim, and fire them, but that one on the right definitely needs to be fired to set the paint. If I let it sit out too long, hair and dust will attach to the paint and wreck the final product when it's fired. 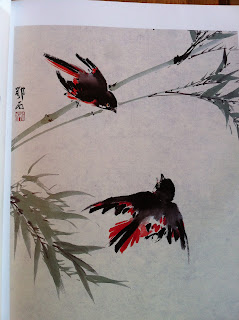 Here's the picture I used as inspiration for the birds/poses on the first mug, then I just kind of switched everything up with different poses but kept the same colour scheme so they're a matched set. 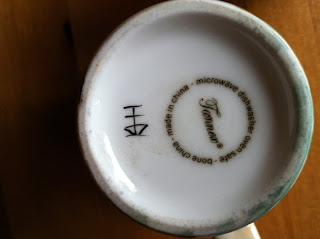 And that's my artist signature on the bottom :) My three initials, actually. I've been using that for almost 9 years. Before that, I used a Egyptian hieroglyph to mark all my stuff. See, in school, everyone had a near-identical set of tools, so everyone marked theirs with masking tape and their name or initials. Since there were four other people with my initials, I started using symbols instead, but quickly got tired of the hieroglyph since it was complicated. I like this one 'cause it s my actual initials, but it's super quick/fast to do, easily recognizable, and you can make it with nearly any kind of brush, pen, pencil or tool. I even created two slightly different stamps for when I was making my own pottery.

If I ever got published, I'd probably sign books that way too. I'm lazy that way ;) Well actually my handwriting is unreadable (even to me) so my actual signature just looks like an ugly scribble. It's not even consistent.

Ah, I just noticed. On the bottom of the mug, you can also see I didn't clean off all the lustre properly. I'll probably take care of that with hydrochloric acid, but because the bottom rim is unglazed, I'm not sure how well it'll take it off.

A small job for another day :)

...and that's what I did last week. How about you guys? What were you up to?

* Because my grandmother has had a long and varied artistic history, there were everything from watercolour brushes, ones for acrylic painting, oil painting, porcelain dolls, chinese brushes, etc. all mixed in with the brushes for porcelain painting. I ended up throwing out more than half the brushes and 'donating' a large handful of watercolour brushes to my teacher for her grandkids to use since she generously put up with me for three straight days :)
Posted by 1000th.monkey at 6:53 AM