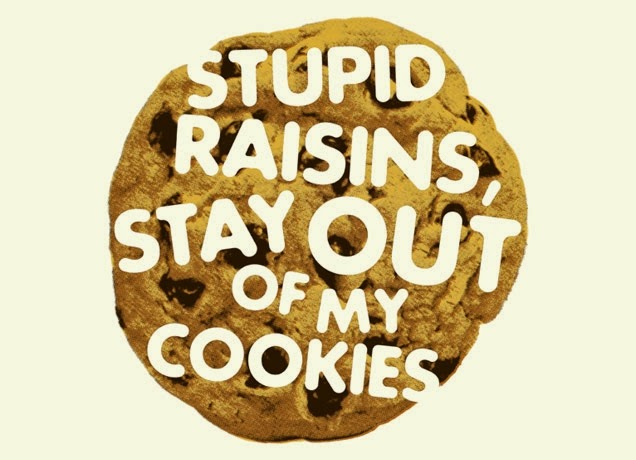 Okay, not only do I want this t-shirt, (from Threadless) but it reminds me of a sentiment I get every time I receive beta-reader feedback* on my work...

I hate raisins. Not only do they taste awful, they're depressing. Grapes that have wasted, shrivelled and dried up. I can't even appreciate a good port or sherry 'cause of the unpleasant-raisin-like-flavor, or the homemade bread pudding my British grandmother makes every Christmas.

There's nothing like biting into a freshly baked chocolate chip cookie, shuddering and going, 'blargh', and wanting to spit it out 'cause you realize too late that it's full of raisins. And the worst part is, I know if I'd spent a moment longer looking at it, I probably wouldn't have taken that first disgusting bite.

It's the same sort of feeling I get when my beloved writing group or beta-readers hand back a chapter of new writing and the comments are things where I go, 'Blargh, I should have caught that!'

I feel like I've not only wasted their time, but mine as well... 'cause if I'd held onto it just a little longer, read through it maybe once or twice more, I would have fixed those suspiciously ugly shrivelled, taste-bud-wrenching little bits. Then they would have concentrated more on the aspects I couldn't have found on my own.

Truly, I believe having other writers (and later when it's more polished, readers) look at my work is invaluable.

But be careful of sending work off too soon... If you haven't done at least one edit on your own and cleaned up all those small, annoying errors like obvious grammar/wording problems, awkward sentences, disappearing characters, talking heads and white rooms, then not only are you making the job much more difficult for your readers, you're not going to get very effective comments. Little stuff like that you can clean up on your own with a little hard work and a willingness to search them out.

Writing partners and beta-readers are critical in finding the big things you don't see 'cause you're just way too close to the story.

Project #1? Yup it was a mess. Still a mess. But my writing group nailed me on a few giant problems I couldn't even see...

If they were battling with tons of little problems, they probably wouldn't have found those big problems, or would have given up and written me off**. Most likely they would not have agreed to read more of my work in the future.

So, be kind to your writing partners and beta-readers. Seriously go through your work before sending it off and try to catch every last problem you can. You will be rewarded, not only with a higher level of feedback, but they will usually be willing to help you out in the future as well.

So seek to build lasting relationships. Do all you can to make the job as easy as possible, 'cause then it wouldn't seem like work to them... they'll have fun.

And ultimately, don't you want readers to enjoy your story?

*By the way, this has nothing to do with a particular beta-reader or even feedback I received on a specific story, this is just a generalized sort of comment...