Something a little different 4

I've had a couple of really busy days (like, haven't-been-sleeping-busy)* and I haven't thought of a topic to blog on for today, so let me revert (aka bore you) by showing another project from my days of education...

This time, not from animation school.

This is from a class on architecture in university. We had to choose any building we wanted, past or present, and make a to-scale architectural model of it and write a research report. 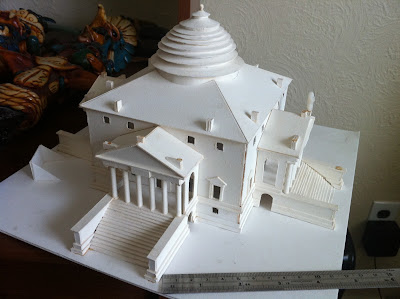 (click on the photo to see it full size)
I chose the Villa Rotunda, a very famous Italian villa by the architect Palladio. It was very obviously based on the Pantheon in Rome, even down to things like how rainwater is channelled through the oculus and through a drain in the centre of the floor down into the basement. It is perfectly symmetrical on all four sides, which is the primary reason it caught my attention. Since I've moved a couple of times, many of the tiny statues (sculpted from Fimo, 5/8" tall, in seven different poses because there are seven statues for each of the four sides -> 28 total) have fallen off/broken and you can see the yellow remnants of the glue. You also can't see it very well, but each pediment is held up by six Ionic columns, and I even made the tops curl properly (seriously, I know I'm such an obsessive nerd...). The entire thing (other than the statues) is made from thin white cardboard and held together with regular white glue.

...anyways, projects like this are what my tuition was spent on, which was only slightly more useful in the real world when compared to animation school...

Okay, I swear you'll get a real post on Monday, so have a happy weekend!

*By the way, if you've noticed I haven't been keeping up with comments/etc, it's because when I'm tired like this, I can't read or write without getting a major migraine (dyslexia sucks)... I swear I'll catch up, but right now it's nearly impossible for me to comment on other people's sites when they have word verification turned on, so I'm still reading everyone's blogs... I'm just not commenting.
Posted by 1000th.monkey at 8:16 AM