Something a little different 3

Okay, this last post is going to be a bit of a hodge-podge, and by the time it goes up, I should be home from my little vacation.

By the way, if you double-click any of these (or the previous posted ones) you can see them full size. If you do that, you can totally tell which ones I kept the original pencil lines and which ones I re-drew in Photoshop (if you're interested in that kind of nerdy thing). 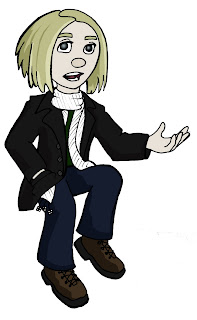 Since I use the black cat as my profile picture , here's a *visual interpretation* of what I look like. My hair is naturally blonde and every two-three years I get it hacked off until it's only about an inch long at the back. I do this 'cause I donate my hair to the Wigs for Kids program, and they need a minimum of 10-12" to make a wig. Right now it's nearly long enough to cut. I'll probably do it in the fall sometime before the static-y winter weather causes my hair to devour my head. 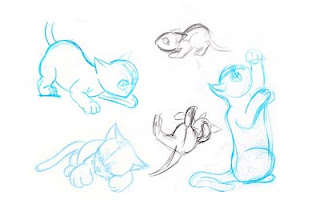 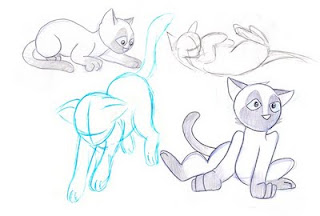 To graduate from the Classical Animation Masters Program, each student had to complete a 1.5 minute short animation. These are some sketches from when I was working out the main character in my short. The final product looked a little different, but these are from when I was getting close. Instead of telling a story, I animated the siamese kitten playing with a catnip mouse, and the whole thing was timed to the *diva* song from The Fifth Element.

One of the many assignments... this was from a Character Design class where we had to design a villain. Now, I'm not much for the evil-dark-lord wanting to take over the universe, so mine was a computer nerd named Kraig who would use his evil knowledge of technology to try to take over the school. I had fun. I still love his buggy fish eyes and his weird jowls. And the fact that when he stands, it looks like he's got a stick up his butt. Oh, his nemesis was a skater-chick who had similarly strange hair. I did a short animation (like, 10 seconds long) of her snowboarding, not for an assignment, just 'cause I wanted to. 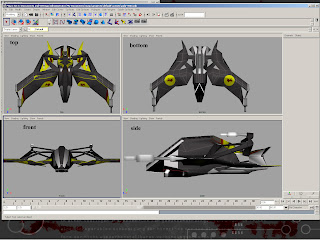 Another class assignment, this time for the Digital Animation Program. This is a ship I built in SoftImage XSI, then exported it into Maya 3d to texture/animate. When you work with 3d models, you usually keep the poly count down while working on it (which is why it looks sharp/boxy) otherwise it uses too much RAM and the program can crash. You increase the poly-count just before you render, which essentially smoothes/rounds everything out. Probably this isn't a big deal now-a-days, but back when I made this, it was a major problem. My favourite part is the crazy multi-level wings. 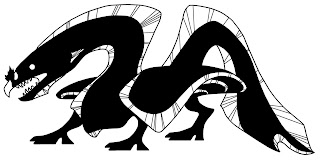 Now this is something I made quite recently... like, last year sometime. Y'know how some books have images at each chapter break? Well, this is the chapter break image I created for Project #1.
It's based on a ribbon eel. Google it. They are awesome. And don't ever ask me about salt water fish or koi, 'cause I'll keep talking 'till your ears bleed.

This is also one of the few things I've done where I love every line, every shape, every speck of negative space. Okay, there's one thing I would change... the spot where the back leg touches the body/wing is slightly too pointy.


One benefit from classical animation training is you get used to drawing the same thing over and over and over and over again, 'cause you're drawing an image for every frame, and there's 24 or 30 frames per second. Then add on all the extra layers for background/foreground, other characters, things the characters interact with... and so on, and so forth...
...see why I have no problem working hard on edits/re-writes? I know some people can't stand the refining process, but I think my favourite part of drawing is also my favourite part of writing... cleaning up the lines.
sorry, that was a bad joke ;)
Posted by 1000th.monkey at 8:43 AM