Something a little different 1

Since I'm on holidays, I wanted to do something a little different. Usually I talk about writing, or something that somehow relates back to writing.

Last week I posted about reading, so this week, I'm going to talk about drawing.

I've mentioned in the past the reason I got interested in animation. When I quit university and joined a technical school for animation, I did a classical animation program (this means everything is hand-drawn) and a digital animation program (everything is created in the computer with models). I truly only loved doing classical animation, but due to the scarcity of jobs, I took the second program. I didn't love it. Well, I loved creating the models and animating them, but I hated texturing and lighting.

While I was unpacking stuff at the witch's hut, I found a hard-drive with all my old animation files. Maybe at some point I'll throw a couple of the short animations online and post links, but not today :)

In the last few years, I regret that I have not drawn as much as I would like. Writing has taken over as my major outlet, but that doesn't mean I've completely stopped. I've done a ton of quick sketches that I give a 10-minute clean-up/colour job in Photoshop (one really crappy one I posted for Dead Monkey Day). I don't spend a whole lot of time on them, so there are always lines I hate, shapes that just a little *off*, but they're just for fun, so I don't stress over it. Most of them look something like this: 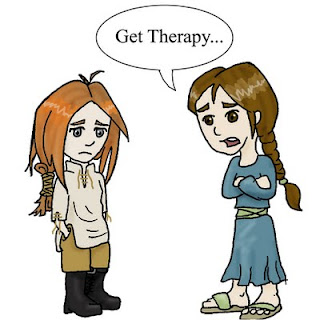 Roan from Project #1 getting advice from a character in a CP's story. I was playing with softer shadows/shading, but I didn't like the final result. I prefer the sharp/strong contrasting shadows of the following ones: 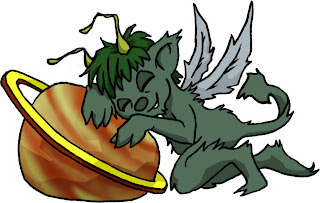 Someone wanted a cute picture for their MSN profile. My favourite part is the two antenna. The hands are pretty cute too.

someone I know online posted a picture of themselves with an evil, plotting smirk...
...and I just had to draw it... though I was scolded 'cause I originally coloured the eyes wrong, so I had to go back and change them from blue to green.
All this kind of stuff is my fast, fall-back drawing style, well, the oval shaped noses, the simple eyes, the hard shadows and exaggerated proportion of head to body. I think I spent the most time on the middle one, making the planet-pillow look cool.
Posted by 1000th.monkey at 7:40 AM