So, I was in Victoria last week Monday -> Wednesday... purpose #1, catch the last 4 koi in the pond, purpose #2, go through the last of my stuff (mostly sports equipment), and purpose #3, visit two friends who are both *expecting* within two weeks of each other, but they don't know each other.

I was successful on all counts, although the trip was emotionally draining. It was really hard being back at the house (the witch's hut) where I spend 2 years re-landscaping, to find all the gardens choked with waist-high weeds, and the lawns covered in that awful 4' tall grass.

I was especially happy to catch the fish, since one of them was the goshiki koi, the one I bought as a living memorial for my grandmother who died a year and a half ago. After releasing them in my parent's pond, it gave me a sort of closure, which can only be a good thing.

At my parent's house, I went through my old animation stuff, which my mom had diligently boxed up and saved. It was a lot of fun going through everything, and I took a few pictures with my phone: 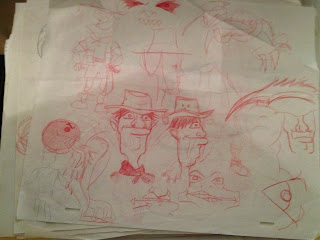 For each program, you had to make a short animation (aprox. 2 minutes) for your final grade. When I first started planning for my classical masters program short, I was going to make a crocodile-hunter-styled mockumentary of a guy *hunting* suburban women, so, like, soccer moms, cougars, etc. I ended up halting planning and switching to something else, but that first picture is the preliminary sketches of the 'host'. 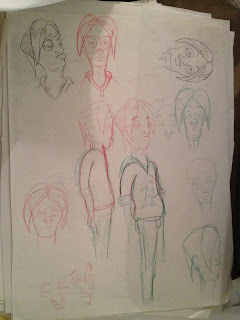 With drawing, and with writing, I don't think anything is ever wasted. While I never developed the mockumentary beyond storyboarding (more on this later), I modified parts of the design I liked for a character design class where we had to design a villain & a hero or heroine. This character became a shut-in-type computer nerd who wanted to take over the world, starting with his high-school computer lab... 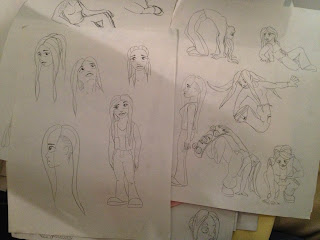 This was his nemesis, a skater chick who unwittingly foils him every time... I later re-made her for a very short animation of her snowboarding, which is one of my favourite pieces that I produced. It's one of the few pieces I actually still have a digital composite of. These sketches bug me 'cause she's off-model... 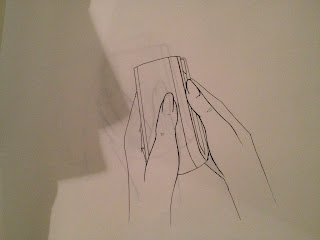 Hands are really hard to draw... so I drew them a lot, just to prove I could do it. I was experimenting with line thickness to give a little more dimension, but I was using the wrong kind of pen, so it ended up looking sloppy :p ...and yes, that's a Palm Pilot -> the fore-runner of the smart phone. 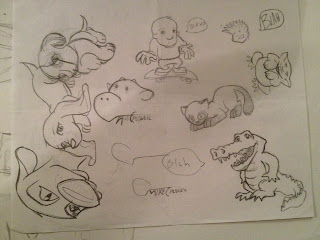 I have... pages upon pages of sketches... just odd little characters I doodled in class. Looking at these, especially, is what prompted me to write the FFF 3.2 piece, because even though I tend to gravitate towards dark writing, my natural drawing style (yes, I CAN mimic many styles...) is full of round shapes and soft, organic lines. The short piece I wrote for FFF 3.2 was something I wanted to draw... 'cause aren't naked-chicken-dragons both hilarious and cute at the same time? 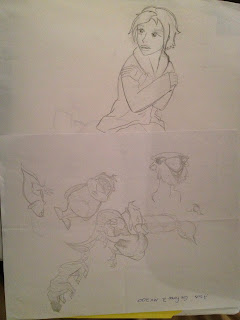 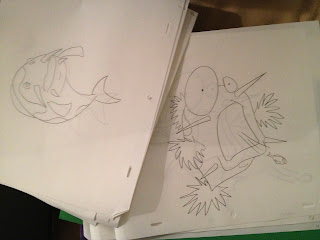 We had to do a lot of short animations (like, 5-10 seconds) as practice. This koi was for a 'take' shot, which is when a character sees something, and has a big reaction to it. I took it further by having a small fish escape by swimming out of the koi's mouth, simply because it made me laugh. 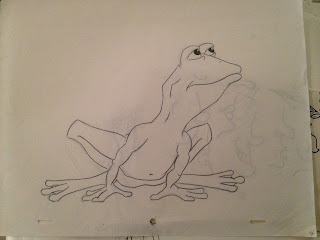 Another character from a practice piece, a head turn. Specifically, when someone turns their head, they normally blink while they are moving, so again, this is one small, natural movement that we practiced recognizing, and animating because every small thing is intentional. For all these exercises, you designed/used all your own characters. I just like drawing critters/beasties better than humans :p 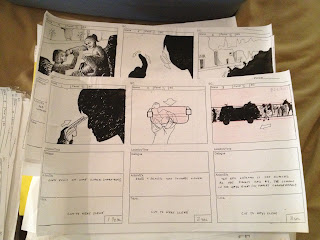 This is an example of storyboarding. We were given a list of characters with basic descriptions/backgrounds, and a script. We had to design characters, then storyboard the script. The plot was a post-apocalyptic setting, and the two characters shown here are Odd (male) and Even (female), a set of twins who were the only child characters. The rest of the cast consisted of adults and robots. For our final demo reels (including the required short animations), we had to do all this kind of prep work, following the exact rules of the industry, because you use different coloured lines to note camera moves, FX, background/foreground layers, etc.

For my classical animation masters program short, instead of the mockumentary, I expanded upon a class project, which was to animate 20 seconds, timed to a piece of music. I enjoyed it so much (I used the diva's song from 'The Fifth Element'), that I ended up animating a 1.5 minute short of a siamese kitten playing with a catnip mouse.

Now, to give you a brief breakdown of the work involved in a 1.5 minute animation... there are 30 frames per second. At an absolute minimum, you would draw a new pose every 3 frames, but for fast movements, you would draw every frame. So, the absolute minimum starts at 1,800 drawings. Then, you have to consider that one pose may be drawn on multiple layers, like, if the body of the kitten is still, but the paw and tail are moving, those are three different layers, so you can easily double that absolute minimum number of drawings to 3,600 drawings.

Plus, there are background/foreground layers, FX layers, and I had a second character (the catnip mouse)... so you can see why it takes a couple months for one person to make a 1.5 minute animation... AND, we haven't even gotten into timing, or lip syncing (more on this later), or all the design/prep/planning/storyboarding/etc. 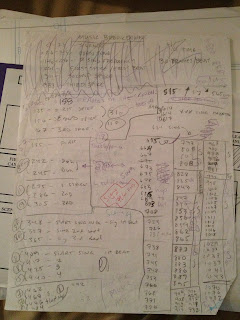 Here's one of my timing sheets... see all those numbers? Those are breakdowns of individual scenes that happen at specific frame numbers. Every time a scene is re-cut, all the timing has to be recalculated. 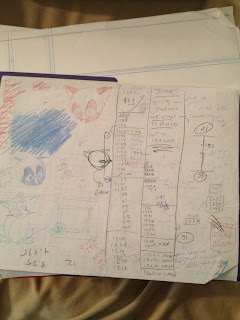 Another timing sheet that I was doodling cat designs on. At this point, the design wasn't finalized. 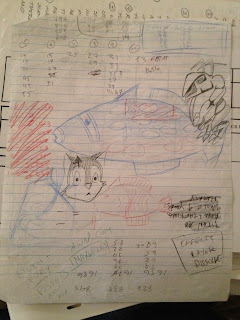 One more, with other doodles. I had about a dozen of these, just for the single animation. 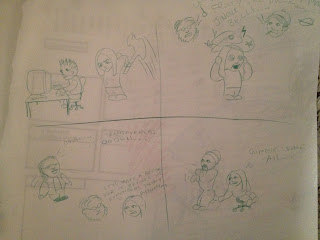 At the end of my demo reel, I made a short animation I titled, "Lobotomy Liz Goes Boom" (long story). More exercises we had to do were FX animations, like, smoke, fire, explosions, water, wind (like a flag flapping or something), etc. Instead of making boring shorts (like a flag -ugh- flapping), I made this short animation of me getting angry and Lobotomy Liz exploding, and leaving the chair on fire & smoking. The first panel of this sketch are me & Liz, the rest are doodles of me & classmates. It was a big hit... 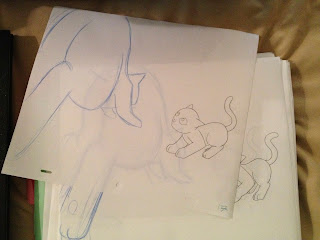 Here's a classic example of my *thrifty-Scottish/Irish-roots*. On one half of the paper, I roughed up one scene, and used the other half of the paper to draw the cleaned up/final version of another scene. When I scanned in the sheets, I could easily just digitally delete the roughed-up drawings and leave the clean ones. That way, I used up 1/2 as much paper, since it's special paper, hard to find, and quite expensive. 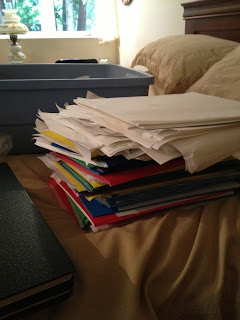 Here's the stack of papers I threw away. Hard to tell in a photo, but it's about 20-22" tall. Every folder is a separate animation, or a separate scene. I think in my cat animation (the one I used for my classical short) had 14 or 15 scenes.

Yes, I threw them all away. The thing is, animation paper is such a weird size that you need a specialized oversized scanner to scan them into a computer, so I know I will never spend the money to track one down just for the purpose of re-scanning in ameteur work I did while in school. If I ever do get back into animating (for fun), I would buy a Wacom tablet or something.

The paper (and light table) are still great fun to draw/design with though :) 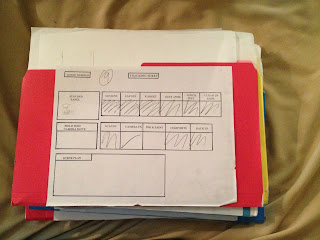 Each folder in that stack looks like this. When a stage is complete, I scribbled in the appropriate box. The first box is the same as what the first storyboard image looks like, so it's easy to glance at the folder and know which scene is which. 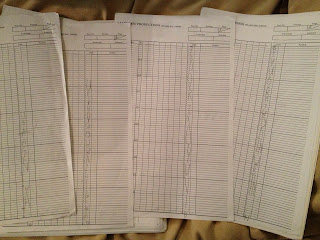 Okay, the BANE of classical animation is lip syncing. For my first, prerequisite course, we had to do a short lip sync piece. I chose a scene from the Parker Posey movie, "Party Girl", which is sort of a cult classic. There's this great scene where she's chewing out her ex-boyfriend in front of a club (he's the bouncer), for pissing in her shower when he was drunk. I animated a turtle and goldfish in a fishbowl to the dialogue, which I thought (at the time) was pretty funny. Anyways, you have to take the sound recording, and you scroll through it over and over again so you can actually time to see how many frames each sound takes... it's freaking tedious!

Because I hated lip syncing so much, that's why I decided against the mockumentary piece for my final demo reel short... since the siamese kitten still required meticulous timing, but I didn't have to draw individual mouth movements as well, which would have added another entire layer, approximately doubling the number of drawings. Since time was an issue, I was smart about it, since doing the mockumentary meant I would have to write  script, record it, and do all the folly (sound effects)/etc, which was unnecessary for the assignment.
Posted by 1000th.monkey at 7:14 AM