Okay, so we've lived in the witch's hut for a little over a year now and I've been hard at work.

As a reminder, here's one of the *minor* de-witching projects I completed already.

What the pictures won't show properly is that our entire acre is covered in knee-deep ivy and 4' tall grass. And under all of that, a thick patch of persistent and noxious weeds.

So, lately I've been talking about working on the patio/pool. If you want to re-watch the funny video of deer eating birdseed on our witchy patio, it's here, but just to show the pure, untainted witchiness of this place when we moved in, here's the patio before any work was done: 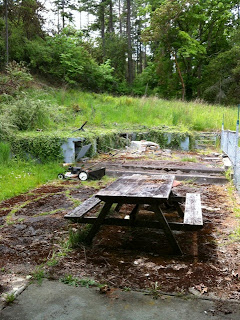 (you can click on the pictures to view at full size)
Actually, I lied. I took this picture after I'd already cut down a bunch of ivy that was crawling all over the patio. What you can't see in the picture is that there was about 6 pieces of random furniture on the patio where I was standing that had been left to rot for... probably 5+ years. And no, I have never tried to start that lawnmower. See that brown stuff on the cement? That's moss. Nearly 2" deep in parts.

Can you see that grey, squarish lump on the upper patio? That *was* the chimney for an outdoor fireplace which was 4'x4'x18". The chimney was solid cement, 7" thick with rebar in it which required 2 solid days of whacking at it with a sledgehammer and using wire cutters on the rebar. Here's a picture when I was about half done. 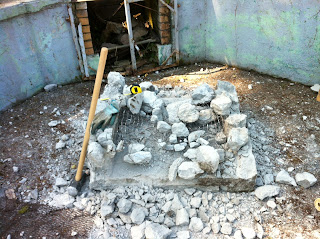 I don't have a picture of the pool full, but I have one I took while I was draining it (before I chipped off all the blue/green tiles, but after I removed all the heavy cement cap stones from around the rim). 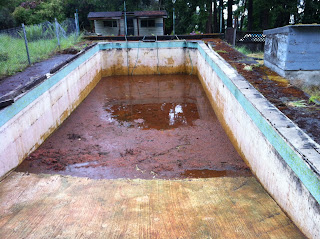 I used hoses to drain most of the water, then used a broom, shovel & wheelbarrow to haul out all that gunk. I think I unloaded close to 35 wheelbarrow loads of gunk. Note all the brown moss around the pool... on the left side I had already used a flat headed shovel to scrape away the majority of it before power washing. I also took down a hideous clap-board fence from the end of the pool which was built with the odds-and-ends of about a dozen different kinds of scrap wood. There's another fence you can see a bit of behind the grey pump house which is also down now. A motivated five-year-old could have kicked that thing down.

In the background you can also see the big shed I spent last week re-roofing.

Now, here's what this backyard is starting to look like: 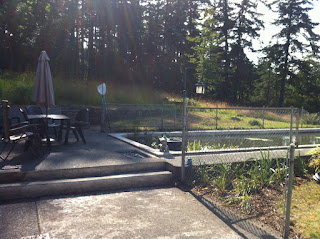 Better? I'm having someone come out to remove the chain-link fence in August.

Also, our front yard used to look like this (after a tree was cut down, which had our entire front yard and house in shade, so even this is better than it was): 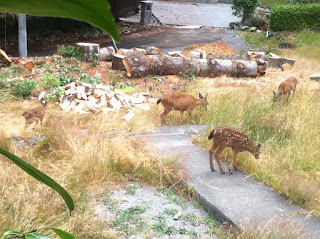 Do you like the classy patch of sand? Yeah, there were renters in here when we bought it who used to sit out on the lawn and throw beer cans into the garden and smoke. That pit of sand was his giant ashtray. That was marvellous fun digging out.

Now the front yard is looking more like this: 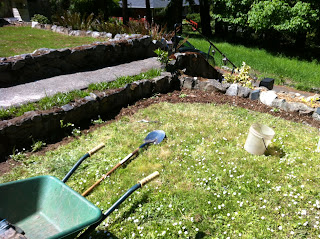 So, was I right in referring to this place as "the witch's hut" all this time? My next project will be to re-do that grey pump house by the pond/pool. The entire wooden top needs to come right off, I'm going to build something lower/nicer with a roof that either slides on castors or lifts in sections (I haven't decided on the design yet), and the electrical in there needs to be completely re-done.

Some of you probably think I'm crazy right about now... to enjoy tackling projects like this, but really, I find this stuff fun and satisfying because I can see a physical result/change for my hard work.

Things never feel quite like they're *mine* unless I've left my mark on them, and this witchy-hut is finally starting to feel a little bit like home...
Posted by 1000th.monkey at 7:05 AM