No, that isn't a swear word in a foreign language...

My lease is up mid-October, and I don't want to stay there because: 1) obscenely expensive rent prices, and 2) it's the condo the soon-to-ex picked out/signed the lease on. I still can't sleep here.

Now, it's been really tricky finding somewhere I want. First of all, I did want to stay downtown... but, either the rent is astronomical, or they don't allow pets. Or they only allow ONE pet... and there's no way I'm choosing between Eva and Berkeley just to stay downtown.

The other thing I've been looking for is... I want a roommate. I've lived on my own since January... and I don't like it. See, I'm a pretty social person. Not that I constantly want to hang out with crowds of people... but it's so much nicer to eat dinner with someone, listen to music, hang out in the evening just chatting over a glass of wine/etc.

And if I want to go away... it's nice to know that someone will water my plants, right?

Now, the apartment I might be moving to is kindof a dive (so, just like the witch's hut, but without the ivy-ridden-acreage and herds of aggressive deer...), mostly 'cause the building is from the early 50's (so, no appliances other than a stove), but it has high ceilings, original wooden floors, we're allowed to renovate... and I have renovated a couple houses and a couple apartments in the last few years. I enjoy it. This place would be a fun project.

...and the girl who lives there is awesome :) Like, insta-bond where, within 30 seconds, you just know you'd be cool sharing space together :) We've been texting back and forth since I dropped by to see the place this afternoon.


Despite the fact that it is not downtown, Kitsilano is a really great place to live. West 4th is pretty much one huge long street of shops, so everything is within walking distance, especially most of the cool independent restaurants in the lower mainland. It's super safe, lots of people barely lock their doors, crime is minimal, it's right across the water from downtown... you could probably walk there in 20-30 minutes if you were motivated. Also, Kits' entire waterfront is a huge park: 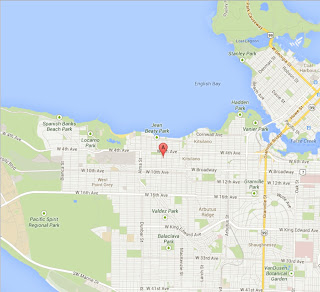 Check that out... from Hadden Park in the east, all the way to the west, which turns into UBC. UBC refers to the University of British Columbia, and the extensive endowment lands it's set on, which has amazing trails throughout the Pacific Spirit Park if you like to run/walk/bike through old second-growth forest.

The entire waterfront is all park & beach, and see the little red 'A'? I would be a very short 6 block walk (so, like 5 minutes) to all that. (For those interested, the upper right corner is downtown Vancouver, see the little words 'Coal Harbour'? That's where I live now)

(Kits is technically: east/west from Burrard street, that yellow N/S road on the far right, to Alma street, which is mid-map, and goes as far south as W. 16th)

There are... kilometres of beach/grass/etc of open space for me and Eva to run around in, and it's all dog friendly. How happy would my little beagle be with that?


I have to admit I haven't made my final decision on this yet. I'm waiting to hear back on a couple things... but this is a very big transition for me. I've never done the roommate thing before... never really lived on my own before (other than the last few months)... never lived in this part of the city before... but I think it'll be a good thing.

...so, I might be spending the next couple of weeks painting, putting up tile in the kitchen, replacing light fixtures, installing cupboards/shelves, etc. which seems fun in and of itself :) ...I wouldn't move in until September 1st, probably, after all the reno stuff is done.

I feel... excited. Which is 180 degrees away from the sick-anxiety/stress that's been keeping me awake for so long.