I've been out most of the day doing running around, doing chores, and making phone calls, and dealing with... some not so happy-fun-things. So yeah, sorry this is going up much later than normal. It's 300 words exactly:

Whenever someone’s asked me that dumb, get-to-know-you-game question, “what kind of animal would you be”, my answer is always the same.
If I was an animal, I would be a northern leopard frog.
Like this semi-terrestrial frog, I’m all, long stringy legs, wide hands, and utterly graceless on land. In the water, though, I’m not flailing through an alien atmosphere, I’m part of it. I am it. Sometimes, I even think I breathe it.
When I was little, my mom took me to the pool everyday, and I’d lie facedown in the water with my eyes open, and hold my breath as long as I could stand it. I’d listen to my heartbeat slow, to the muffled sound of bigger kids splashing and the lifeguard yelling. He pulled me out the first couple of times, all panicky, ‘cause he thought I was drowning, but quickly learned to ignore what he called my ‘dead-man’s-float’.
I’d come up only when I needed air.
But I think I don’t need air anymore.
Frogs start out as tadpoles that breath through gills, then they slowly transform into adults with lungs.
I think I’m like a northern leopard frog, but transforming backwards. Just below my ears, it’s been itching where I swear my gills are forming under the skin. I can already swim underwater the entire length of the pool, on one breath.
The thing is, it freaks people out, so I don’t try harder.
And I think I do just need that one, final push to get my gills to break through and start working. Kickstart them.
Which is why I’m going to sneak in tonight after hours with a 45lb kettle-bell weight and the pair of handcuffs I bought on eBay.
Just one, final push.


By the way, I wrote about frogs because there were like, hundreds of tadpoles along the shoreline while I was at the cabin... so cool: 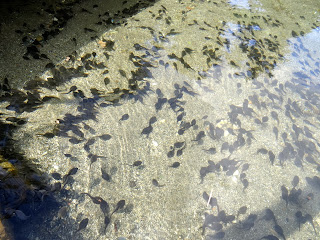