Well, it's nice to be home again, despite the constant cold that seems to blow right through the walls of 'the witch's hut'.

I've posted a picture of my beagle on here before, but I've talked more about my cat, like how he's in every story I write, just rarely as an actual cat, and that he's a rescue cat with major personality issues.

After being gone for more than a week, I picked the pets up Friday afternoon. The dog was wiggly and excited to see me, but as soon as we got home, she settled into her normal routine of sleeping and only waking up when she thinks she's going to get fed or when she wants to go outside and tear around in circles like a crazy beast (sigh... beagles...).

Usually the cat is super clingy for about a day (goes into every room in the house and cries until I call his name, then comes scurrying into whatever room I'm in) before going back to his usual aloof self.

This time though, he's been attached to me constantly, even now, the third day since he's been home.

He's not normally a cuddly cat. On occasion he will lay across my lap, but the moment I touch/pet him, he'll lash his tail, and if I try again, usually he'll bite me. Not hard enough that I bleed, but enough to leave half-a-dozen little fang-dents in my skin.

For the last three days, every time I sit, he jumps on my lap, stretches out and falls asleep. He doesn't even twitch, no matter how much I pet him, and he only bites me when I try to get up/move. He's been getting up in the night, going into other rooms and crying... until I barely whisper his name, then he runs into the bedroom, stands on top of me and rubs his nose all over my face, hair and hands (marking me, 'cause cats have those glands around their lips). He did this four times Friday night and three times last night. He's been following me all over the house, scratching madly on any door I close (there are rooms our pets are never allowed into, like bathrooms/spare bedroom/etc), chirping for attention and standing on my foot and wrapping his front paws around my leg -> wanting to be picked up and carried around everywhere or draped around my neck/shoulders.

...this is highly unusual behaviour... and it's making me a little worried, though I know for sure it's not 'cause he was mistreated at the kennel. He'll actually let the owner touch/play with him, which is... amazing to say the least.

...but is it also a terrible thing that I'm finding his strange behaviour super interesting/curious and I am paying close attention so I can write this behaviour into a character at a later time?

For now, I suppose he's just craving reassurance (maybe some kind of abandonment complex from being a rescue animal... even though we've had him 7.5 years and have left him at the kennel that long before), while the dog is cuddled in a ball on a different sofa snoring away happily. I think it's totally wrong to say dogs are loyal and cats are not. I think it's the exact opposite. The dog loves anyone who feeds or plays with her, but for my cat, only I will do. He doesn't share his love with anyone else, no matter what you try to bribe him with.

Anyways, 'cause he's solid black, it's nearly impossible for photos of him to turn out well, but here's a picture of my little philosopher: 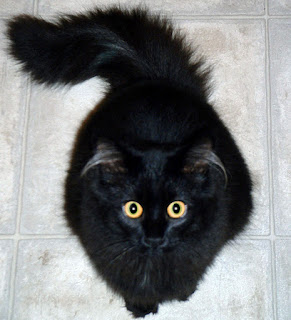