Yeah, since my past post when I said I had one rib out... On Monday I had to go for emergency chiro 'cause I couldn't breathe... turns out 8 ribs were out.

Here's a quick lesson on anatomy:

Humans have 12 sets of ribs. 10 connect to both the spine & the sternum, and the last two are teeny little ones that only connect to the spine.

Of the top 10 (which connect to the front & the back), the middle 8 had popped out of their joints and were jabbing inside. Not a lot of fun, I can tell you that. Luckily there was a great chiropractor who fit me into his busy schedule (actually, let me come after his working day was over), and popped them all back into place.

While not at chiro or walking the dog (getting to that), I've been lying flat on my back, or on a rolled up towel -> lengthwise up the spine, which forces the muscles around the spine to relax and the ribs to flex into the proper position.

...and since I couldn't be on the computer, I ended up watching the first 4 season of "Weeds", since the Canadian Netflix only has half the series...

Good news? After my third chiro appointment (yesterday), the ribs have been staying in place (so far), and even at my worst, I still walked Eva on the Seawall everyday. I'm trying to build up my stamina to take her around Stanley Park, which (from my condo), is about a 14 km (8.7 miles) journey.

See that narrow strip of green at the bottom right of the map? That's the Harbour Green Park, which is a few blocks from where I start out, (and posted pictures of before) so even getting to Stanley Park is about a 2 km (almost a mile) walk.

Today I took Eva to the 4.5km point on the map (almost to the Lions Gate Bridge at the very top), which means it was approximately a 13km walk (a little over 8 miles).

The weather was dark, there were sporadic showers of rain, and I came home with blisters... but I had a glorious time.

It also occurred to me, but only on the way back, to take some pictures of the different "sites" along the way. 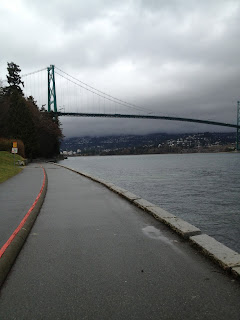 Here's the point where I turned around. That's the Lion's Gate Bridge, which has a pretty interesting history behind it, not all of which is on the Wiki page... essentially, all the guys with big money who lived in the British Properties didn't like driving the looooong way around and pretty much threw their weight around and forced the city into getting the bridge built. You can see West Vancouver in the distance, where the British Properties are. And hey! Built with beer money! (Or Irish mob money...?) Gotta love that! 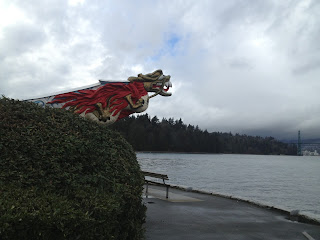 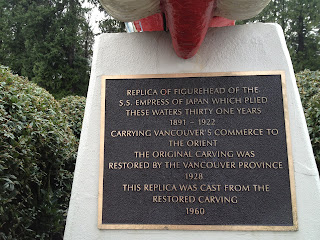 I vaguely remember seeing this from, like, 15 years ago, which is the last time I actually went around the entire Stanley Park section of the Seawall. My sister, myself, and two friends (who are also sisters) rented bikes and went around as something fun to do on a Saturday. We also rented roller blades to do the same thing. 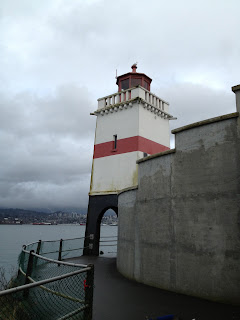 This is a really cool old lighthouse, and that's North Vancouver in the distance. The Seawall takes you under it, but if you drive around Stanley Park in a car, you can stop at it on that upper level. In the past couple days, I've gone under this on 3 different days, and only once was there a couple guys who smelled distinctly of West Coast Incense.* 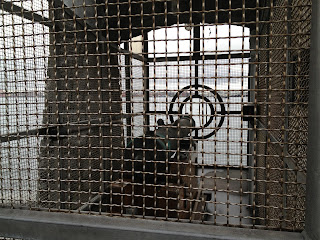 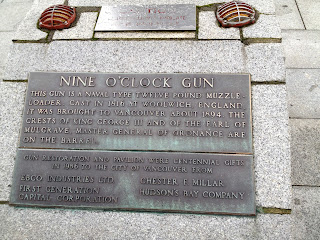 I like this old canon, but I seem to remember it didn't used to be in this big protective cage... but I might be wrong on that. 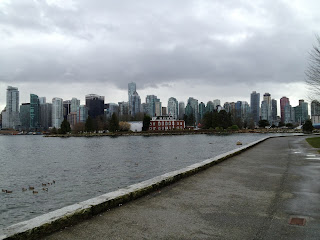 That's Deadman's Island, with the brick building (look at the Stanley Park map), and behind it is downtown Vancouver. That especially tall building in the middle is the Shangri la, the tallest building we have (62 stories) and if you look to the far left, there's a really green glass building... that's the Harbour Green 3 tower, currently the most expensive real estate in Canada (the cheapest one I could find online is over $2000/square foot - that's over 5.4 million dollars for 2,500 square feet, to rent it's $12,000/month), and it sits at the very end of the Harbour Green Park (Harbour Green 1 & 2 also border the park) where I start my walks with Eva.

I can also see my building, but I ain't gonna tell ya which one ;) It certainly isn't in Harbour Green 3 ;) 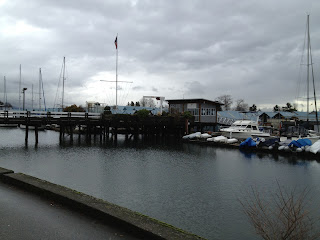 This is not all that important, but it's the Coal Harbour marina Royal Vancouver Yacht Club. I just think it's cool that you actually drive your vehicle out onto the dock to get to your boat. 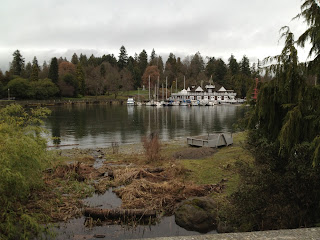 This is shot from a small bridge, right where Stanley Park begins, and that's the Vancouver Rowing Club in the background. What's hidden by the trees to the right is the off-leash dog park I take Eva to every morning, so I spend a good chunk of my morning looking across at that building. Like the Royal Vancouver Yacht Club, it's built over the water on pilings, like a boathouse. It's got a full gym and everything inside... very cool :) 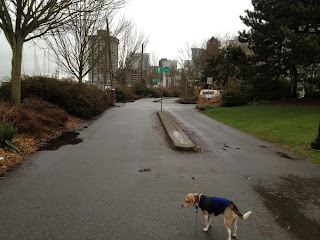 And here we are right after the off-leash dog park, just heading back into the city. Doesn't Eva look sad with her hangy-down tail? She hates wearing those flannel coats, but beagles don't have undercoats, so they get cold easily. It's a necessary accessory on rainy days.

What have you all been up to the past week or so? Sorry, again because of my ribs, this is the first time I've been online since my last post... so I've missed everyone's blogs that I usually follow/read.

It's midnight here, so time to go to sleep :)