Well, one more busy day before back to routine, hope you all are having a great long weekend!

Our long weekend started on Thursday morning, on our way to Seattle for the last Seahawks pre-season game, which was FREAKING AWESOME! Also, Fin, the Killer Whale mascot of the Vancouver Canucks made an appearance. 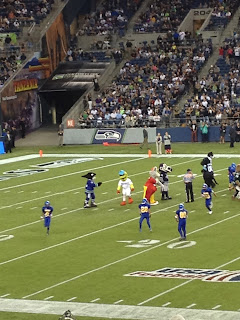 For the half-time show, all the local team mascots (and Fin) played football against a local high-school team. The funny part was, since Fin was the only non-football mascot, he pretended he didn't know what he was doing and proceeded to lay down on the field, start fights, etc. Whenever he blew smoke from his blow-hole, the crowd went wild.

Oh, and if you're interested in a writing prompt, here's a picture I took on the I-5 going into Seattle: 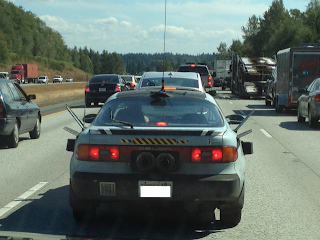 We couldn't figure out what the heck was going on... was he trying to contact aliens (note the giant antenna on the top) or were those fins bolted to the side of the car supposed to be solar-panels?

Also, what's with the fake *blasters* where the licence plate would normally go?

On the front there was even more weirdness, including more randomly bolted on parts, and an interesting paint job featuring the jolly roger (skull & cross-bones) that was obviously painted without using a stencil or professional materials. Seriously, it was literally just a matte black rectangle with the skull hand-drawn in white.

I think the oddest thing about the car was the age of the driver. Probably late 60's-> early 70's. I would have expected to see a teenager driving it. Maybe he was borrowing his grandson's car?


...as for finishing my edits? One of the best thing about long car rides is the brain gets a chance to roll around and made interesting connections it might not have before.

Long story short: I send myself 23 emails of reminders of things to change/check/add in 'Brake Fluid'. Luckily most are small things, BUT I did manage to finish the main chunk of edits and my document is now 23 words shy of 54,000 words.

Pretty close for my guestimation of 55,000 after the first edit... and after I clear out those 23 reminder emails in my inbox... who knows? I may just hit it!

How about you guys? Any wonderful log-weekend plans? Did you play or work? Writing? Travel? Camping? 48 hour X-Box marathon?
Posted by 1000th.monkey at 12:46 PM