Well, I timed it out. To figure out a design, make templates (only necessary due to the... complicated nature of the design, coupled with the complicated piece of porcelain), draw them on the porcelain, then red resist the areas where I don't want lustre...

4.5 hours. Per piece. And that doesn't include an entire day of going through books getting ideas for possible designs, and several more hours of sketching designs on the porcelain, and then wiping them clean and drawing something else.

Last night around midnight I was still going through boxes of painting stuff and managed to pull out all the lustres and what a lay-person would think of as *gold*-> the shiny (or sometimes matte) stuff that's usually on the edges/rims of expensive china/porcelain sets (like Wedgwood, etc), but even though they do include gold as one of the ingredients, they are actually considered lustres. Liquid Bright is the yellow gold coloured stuff, Paladium is the white gold/platinum looking stuff, and you can also buy copper, etc.

About half those bottles had dried up, and were therefore not usable anymore.

Thankfully most of the other lustres are pretty reasonable because they don't have as much gold content.

BUT, there were a whole bunch of strange/odd lustres that my painting friend/mentor had never heard of/used before... so, I did up a test plate which will be fired tonight. Tomorrow when I go over, I'll be able to see what they look like *for real*, since when they go on, they look like this: 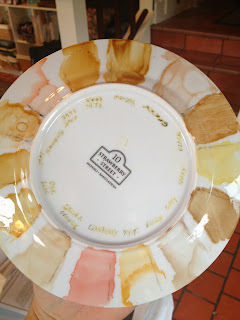 Yeah... see why doing the tester will be a good idea? I'll post a picture of the fired version tomorrow.

I was also practicing penwork by labelling each lustre. Not, like a pen you buy at a store... a nub pen that you dip in ink you made from the dry/ground paint. Like calligraphy, I guess... but writing/drawing on paper with one of those pens is an entirely different experience than drawing on porcelain since paper has texture. The porcelain surface is so slick, it is very difficult to get the ink to come out smoothly... I probably wrote each line 5+ times before I could get any ink to stick. You have to be crazy specific with how you hold it. A little too flat, or a little too upright, and you get nothing for your trouble ;)

...and both my designs are going to require a lot of penwork.

'Cause it's not like I could, y'know, do something easy... I mean, the last time I painted was at the Porcelain Artists convention in Ottawa, which was May 2012. So, a year and a half since I've even touched a paintbrush... seriously, my painting buddy/mentor spent the entire day shaking her head and laughing at me.


Now, am I boring you guys with this painting stuff, or are you curious to see what I'm doing?

I've been taking pictures on my phone throughout the process, partially to post if you guys ARE interested... but mostly because I'm probably going to send them to the two people I'm making these gifts for since both of them are into art, but not this kind of art... so I know they'll appreciate seeing the process.