Yes, I am Canadian (and I might be a little crazy)

I disappeared good, didn't I?

Well, I figured since so many bloggers were heavily involved in the A-Z challenge that no one would be the wiser if I slipped away for a bit of offline-down-time.

One thing I did... went back to Victoria and packed up/moved all my stuff. Well, most of it. I left about 1/2 my books, 1/2 my movies, all my sports gear (except my beloved Sims snowboard), and after a tragically long day of packing/movers, and the pond pump not working (so we ended up in the water bailing by hand), successfully managed to catch and transport 11 out of my 16 koi. They are now living happily in my parent's pond.

This past week I escaped to the family cabin.

It's on a little lake about 2 hours out of downtown Vancouver. I love going there. After driving out of the city, you hit the valley with farms/etc, then wind through the foothills a bit. My grandfather built the place when my mom was a little kid. "Rustic" would be the polite term for the place ;)

There was electricity, but I think I was around 7 or 8 when we finally got water... before that, if you wanted to cook/clean/etc, you had to walk down and draw a bucket of water from the lake. I was 13 or 14 when they finally installed a hot water tank, and a shower! Yup, washing your hair meant jumping in the lake, climbing onto the dock, scrubbing up, and jumping back in.

With no tv, no internet, and in a small town where there's not a whole heck of a lot to do, I managed to do a couple things I haven't been able to do for months: read (3 full YA books and a short/accompanying story to one of those books), and write (about 1,500 words on the Jay/Kell story). 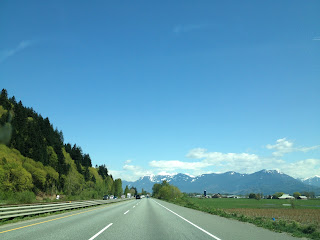 Farms on the right, foothills up front. If I had aimed my phone a little to the right, you'd be able to see an amazingly clean/huge view of Mt. Baker (in Washington State) 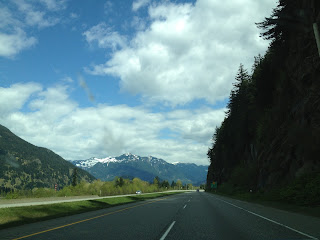 Here's winding through the foothills... though you can't really see the big hill on the left, on the right, there are all these amazing seasonal waterfalls which pour down the melting snow each spring 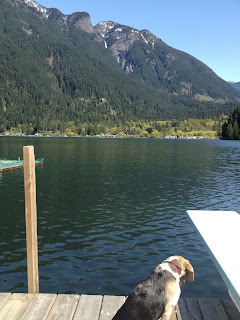 Ahhh... on the deck, 20 C (68 F), and that lake couldn't have melted before yesterday... No, I'm serious. It was frozen solid in January, and just a week before I went to the cabin, there was a fresh dump of snow that went half-way down that mountain! While Eva (as you can see) was good to wander around on the deck, Berkeley contented himself with hiding under the cabin and hunting tasty spiders. Cats :D He's used to wearing a harness/being tied up outside, and he's been to the cabin a number of time, but this was only Eva's second visit. 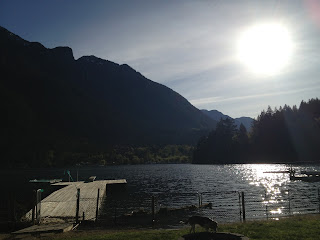 Morning view from the deck of the cabin, around 9am. Seriously, can it get better than this? Truly a perfect moment to pause, consider, and feel blessed by the good in my life rather than focusing on the bad. Even coffee tastes better with this view. 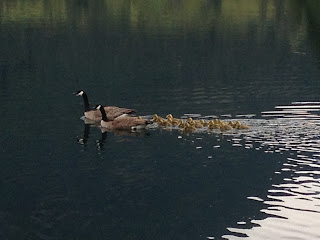 The very first batch of new Canadian geese! These two parents were hanging out around the dock all week (on and off), and on my final day, I guess their little ones were finally strong enough to take their first tour of the lake. Pretty cool... though Canadian geese are noisy suckers, destroy lawns (hence the fence in the previous picture), and can be pretty vicious. By my count, I think there are 16 babies... but it's hard to tell with them all clumped up together, and zooming in on my phone isn't the best :p

Oh, the being crazy part I mentioned? I swam in the lake every day I was there, except the very first day. And no, not in a wetsuit or a drysuit. More than one neighbour wandered down to check it out... more than one called me crazy (or just thought it strongly enough that you could plainly read it on their face). I was smart though, limiting it to 20 min max because you lose body heat so fast in water that cold that it can be dangerous. The water was so cold it tasted of metal, but I still had a fun time swimming around and diving off the dock. I do love swimming ;)

Anyways, that's where I've been, and while I may not be fully healed, at least I've got a bit of my charge back now ;) I am already planning to commandeer the cabin again for at least a week in June and hope to get a good chunk of writing done ;)